The Salesians are a catholic religious order founded by a Catholic priest, Fr. John Bosco, which in Italian is translated Don Bosco. He began his work in Turin, Italy, in the mid-1800s by gathering poor boys and young men that had no place to live and little education.  He established a place called an oratory where these young people could gather and call their home.

Don Bosco started with the help of many lay people, which he later organized into a lay association in the Church, called the Association of Salesian Cooperators. From among the young men at the oratory, he founded a religious congregation, the Salesian Society, which consisted of priests and brothers. It was named after St. Francis de Sales who was known for his kindness and simple spirituality.

With the help of Sr. Maria Domenca Mazzarello, he founded a society for woman, the Daughters of Mary Help of Christians, known as the Salesian Sisters.

Don Bosco died in 1888 and was canonized a saint in 1934. Since then his Salesian Society has been known as the Salesians of Don Bosco.

What do Salesians do? 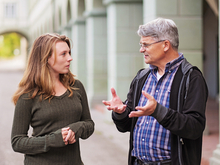 Salesians minister to young people wherever young people are found. Our mission is to be signs and bearers of God's love for young people. Don Bosco wanted his Salesians to use all their energy and creativity to bring the Gospel of Jesus Christ to youth. We accomplish this mission through our daily outreach to the young. Salesians are noted for their great love of Jesus Christ, especially in the Eucharist, for their devotion to Mary Help of Christians, and for their fidelity to the Holy Father in Rome.

Today the Salesians of Don Bosco number 15,300 priests and brothers. The Daughters of Mary Help of Christians number over 13,000 Sisters. There are over 27,000 Salesian Cooperators. We serve in more than 130 countries.

To the Website of the Salesians of Don Bosco in Germany